The Importance of Retaining Tax Records 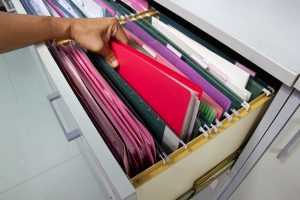 We discussed in a recent Beyond the Bottom Line that the Biden administration’s tax plans include significant funding increases for the IRS. Therefore, in the coming years, taxpayers can expect an increase in audits and it is important to know how long to keep records in case of an audit. Tax documents do not have to clutter taxpayers’ homes forever, but it is important to know which files to keep and which files to shred as well as when to shred them.

Our focus in this summary is on the retention of records related to IRS assessments of tax, including assessments arising from audits or other enforcement measures related to the administration of federal income, gift and estates taxes. We note that state and local taxing authorities may have limitation periods not explicitly tied to the federal tax law. Also, taxpayers, particularly business taxpayers, may face other record retention requirements outside the federal tax area, such as for labor laws, ERISA, and other third-party claims in general.

If taxpayers don’t have proper records and the IRS conducts an audit, they could deny a legitimate credit or deduction that taxpayers have not properly documented. Generally, you must keep your records that support an item of income, deduction or credit shown on your tax return until the period of limitations for assessment related to that tax return expires. The period of limitations is the period of time in which you can amend your tax return to claim a credit or refund, or the IRS can assess additional tax.

Under §6501 of the Internal Revenue Code, generally, the amount of any tax must be assessed within three years after the return was filed (whether or not such return was filed on or after the date prescribed). §6501 also provides that the IRS has six years from the date of filing of the return to assess tax if a taxpayer omits or fails to report gross income that exceeds 25 percent of reported gross income. For example, if taxes are due on April 15th and filed on May 22nd, taxpayers must keep their records for three years (or six years, if applicable) from May 22nd.

The three and six-year assessment periods represent the more commonly encountered situations. §6501, however, also mentions situations (e.g., false or fraudulent returns, no return filed) for which the assessment period does not expire.

Based on the three and six-year rules discussed above, the recommendation to taxpayers is often to retain records relevant to their income tax returns for seven years – one more than the six-year limitation period – to leave a cushion and avoid the necessity of knowing the exact date on which a return was filed. In addition to this general seven-year recommendation, we summarize below some other considerations regarding the retention of records in the described circumstances. In situations below where the three-year rule is mentioned, you might consider substituting seven years for the reason stated above.

If the IRS conducts an audit, it is important to have all of the documents the IRS requests readily available and in an organized manner. The audit will run much smoother if taxpayers quickly respond to IRS requests with the proper records. The best storage approach is to keep the records on a secure computer in an organized file folder with notes concerning when the documents can be deleted, so that the files do not clutter memory space once they are no longer needed. However, if a computer is not readily available, taxpayers should keep an organized paper file for each tax year and separate permanent files from temporary files. If you have questions or concerns about record retention, please contact your BMSS professional.